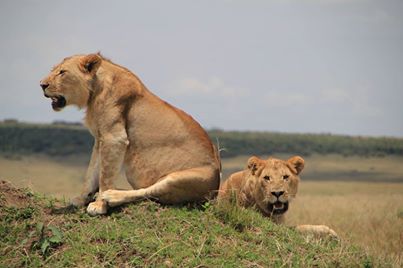 Following breakfast, travel north to the remote Samburu Reserve. This is the homeland of the nomadic Samburu people, whose culture attaches great value to tending their livestock of cattle, sheep, goats and camels as their main economic activity. Samburu is rich in species not seen in southern Kenya's more famous parks, such as Grevy's zebra, reticulated giraffe, kudu and gerenuk. You'll also have a good chance at spotting lions, cheetahs and the elusive leopard. The semiarid landscape is dramatic, with the rugged outcrop known as Mt. Ololokwe a prominent feature. The Ewaso Ngiro River, which forms the southern boundary of the reserve, attracts many birds and is a popular watering hole for elephants. Arrive at your Camp site in time for lunch and some relaxation, then take an evening drive for more game dinner and over night at the Campsite. LDBB

Enjoy another day of game viewing drives in the Samburu Game Reserve during two safari drives, one in the morning and another in the early evening, in a safari vehicle with roof hatch access for perfect game viewing and photography. Guided by your expert driver, enjoy searching for animals native to this fascinating and beautiful area. All meals and over night stay at the camp site.

Early this morning, travel to Lake Nakuru National Park arriving in time for lunch and some down time, enjoy a game viewing drive to view some of the two million flamingos at close range as well as other animals that inhabit the park.
This park is a rhino sanctuary, offering the rare opportunity to see these endangered animals. It's also home to rare Rothschild's giraffes as well as buffalo, leopards and lions, which are known to climb trees. In a budget camp in Nakuru LDBB.

After breakfast, board your touring coach for the Masai Mara National Reserve, which borders Tanzania's Serengeti National Park. Every year, between June and September, millions of wildebeests and zebras migrate into the Mara in search of water. The timing of this phenomenon varies, depending on the rains, but they usually start heading back to the Serengeti in October. Whether you see the migration or not, the Mara almost guarantees you'll enjoy a magnificent time in Kenya. Here among the grassy plains and lush landscape, you'll find a huge variety of game, the largest in Kenya, including lions, cheetahs, buffalo and abundant bird life such as ostriches, cranes and storks. Enjoy lunch at your lodge then relax until later this afternoon when you'll take your first game drive through this haven of wildlife. Dinner and overnight at the Campsite .LDBB

Today you will take two safari drives, one in the morning and another in the early evening, in a safari vehicle with roof hatch access for perfect game viewing and photography, you will enjoy searching for animals native to this fascinating and beautiful area guided by your expert driver, who will amaze you with his ability to spot game hidden in the bush. The Campsite.

Depart after breakfast drive to Nairobi