Tanzania safari holiday this is one of the unforgettable Luxury safaris, Where you will explore the vast wilderness, witness the battle between the predator, Crossing Mara river in search for greener pasture, hunger crocodile awaited the wildebeest and common zebra. 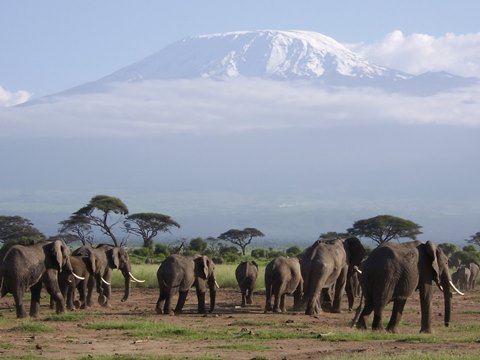 Tanzania safari holiday this is one of the unforgettable Luxury safaris, Where you will explore the vast wilderness, witness the battle between the predator, Crossing Mara river in search for greener pasture, hunger crocodile awaited the wildebeest and common zebra.

You'll be personally met when you arrive Kilimanjaro or Arusha airports and taken to a lovely resort in a thick African forest, Rivertrees, in the foothills of Mount Meru, Africa's 5th highest mountain. Activities are available for those who arrive early for their Elephant Migration safari in Tanzania.

After breakfast you drive onto the western slopes of Mount Kilimanjaro onto a private Maasai conservancy of more than 60 000 acres. Bordering Kenya's Amboseli National Park, the area has abundant game and breathtaking scenery. You'll have opportunities to track elephant on foot, meet local Maasai and experience some fantastic game viewing.
Join others around the campfire for sundowners before gourmet dinners prepared by professional bush chefs. Gaze at the unbounded evening sky before turning in. Enjoy outstanding luxury accommodations in Olmalog Camp surrounded by the sounds of Africa.

This day of your Elephant Migration safari in Tanzania is spent meandering through northern Tanzania, through villages that rarely see tourists, and including the booming town of Arusha as well. You'll have a privately guided tour of an important anti-venom snake farm, and by late afternoon arrive Kirurumu, a beautiful tented lodge located right on the edge of the Great Rift Valley.

Full day exploring this great natural wonder. The hundred square miles contain an incredible amount of game, including large prides of lion, free-ranging black rhino and some of the most approachable eland on the continent. The unusual ecosystem has protected wildlife for millennia. Meals and overnight at Ngorongoro Sopa Lodge.

An early departure to arrive Tarangire National Park by noon. This is the best time of the year for this great Elephant park, with its many magnificent sand rivers and dense bush. After lunch at a northern lodge, spend the afternoon game viewing through the park, encountering the large numbers of aggressive elephant. In some respects the park is more like a southern than East African park, with its heavy woodlands. By nightfall you've arrived the intimate and luxurious Swala Camp deep in the southern part of the park.

Full day exploring the sand rivers, woodlands and amazing baobab forests of this great park on this Tanzania safari. The birdlife in Tarangire is outstanding, sitting directly underneath a flyby between southern Africa and Europe, capturing migrants from both hemispheres. Leopard is particularly abundant here, as is giraffe. But above all, the highlight is the large numbers of elephant families, forced together after hundreds of miles of migration, to dig for water in the sand rivers. Meals and overnight at Swala Camp.

Return to Arusha after breakfast for lunch at a popular local restaurant, and for some time for shopping before returning to Rivertrees where private rooms are available until the transfers to the airport for the evening departures.

Cost of the Package