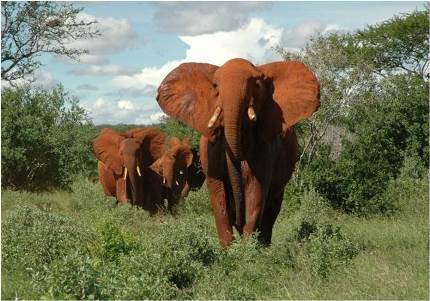 Tsavo East and West form one of the world's largest game reserves- 13,000 sq. km. nearly all of Kenya's wildlife is represented in the two Tsavo parks. The park has a large number of elephant herds.Tsavo West National Park is situated 200 kms south-east of Nairobi. Tsavo East is one of Kenya's oldest and largest national parks and accounts for 40% of the total land area devoted to game parks in the whole of Kenya!

The northern part of Tsavo East is now the focus of the Kenya Wildlife Services who are investing in appropriate infrastructure to allow tourist visitation. Nevertheless, the Tsavo National Park, founded in 1947, is one of the most visited tourist attractions in Kenya

In spite of its arid countryside and savannah vegetation, about 60 species of mammals and 400 different species of birds are to be found here.

The Tsavo is particularly famous because of the "red elephants" which owe their colour to the dust prevalent in this area.  The park is home to lions and cheetahs. There are many antelopes (oryx, kudus, and Grant's gazelles and giraffe gazelles), Burchell's zebras, Masai giraffes, baboons and vervet monkeys. Of the birds, the most impressive is the Masai ostrich. In areas such as Mzima springs, crocodiles and hippos can be seen wallowing in the waters.