The adventures in the bush begin with spectacular Samburu National Reserve romantically situated, foothills of Mount Kilimanjaro, Amboseli is famous for its tremendous variety of big game. Amboseli is an excellent place to view a multitude of wildlife, including everything from Lions, Cheetah to Wildebeest to Giraffes to Baboons. Optional visit to a Masai /samburu village is available as this is the home of the Maasai /samburu people. Here you learn about their tribal social systems, customs and the place of the Maasai in today’s Africa. The residents live in their Manyatta, or village, much as they have for centuries and a visit gives you the opportunity to see the interior of these mud-hut homes, spotless and unadorned, contrasted with the Maasai themselves, bedecked with brilliantly colored beads and cloths. 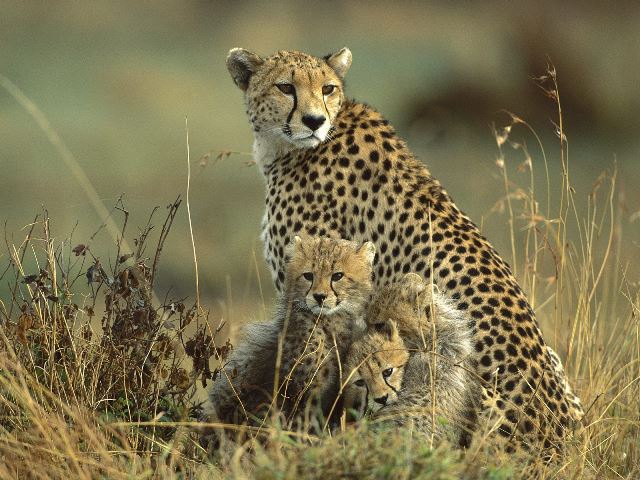 The adventures in the bush begin with spectacular Samburu National Reserve romantically situated, foothills of Mount Kilimanjaro, Amboseli is famous for its tremendous variety of big game. Amboseli is an excellent place to view a multitude of wildlife, including everything from Lions, Cheetah to Wildebeest to Giraffes to Baboons. Optional visit to a Masai /samburu village is available as this is the home of the Maasai /samburu people. Here you learn about their tribal social systems, customs and the place of the Maasai in today’s Africa. The residents live in their Manyatta, or village, much as they have for centuries and a visit gives you the opportunity to see the interior of these mud-hut homes, spotless and unadorned, contrasted with the Maasai themselves, bedecked with brilliantly colored beads and cloths.

Day 1/2: PICK UP FROM NAIROBI HOTEL/AIRPORT

Drive toward Samburu National park, With its incredible wildlife and picturesque surroundings, it's a real surprise that Samburu National Park remains one of Kenya's lesser-visited regions. However, its peaceful atmosphere and the authentic wilderness experience set it apart from the country's better-known wildlife reserves.
Situated on the banks of the Ewaso Ngíro River, with its palm groves and dense forests, Samburu boasts plentiful wildlife and the birdwatching is especially good. The remainder of the reserve is semi-arid, making for easy game viewing.samburu sopa or similar FB(L,D,B,B)

Morning transfer to Lake Nakuru National Park, a small (220-sq. km) beautiful park with lakes fringed by swamps and surrounded by dry savannah. Lake Nakuru National park is one of Kenya’s
most ecologically rich and surprising national parks and is widely regarded as offering one of the world’s greatest bird spectacles – more than a million lesser flamingoes painting the green waters of Lake Nakuru a fluttering pink. The 188 square kilometre park, enjoys some of East
Africa’s rarest creatures abound, including fast-growing populations of black and white rhino, the endangered Rothschild’s giraffe, buffalo,waterbuck and lion. Lake Nakuru also enjoys a reputation as one of the best places in the country to spot the elusive leopard. Dinner and Overnight at Merica Hotel/midland hotel or similar property (L,D,B,B)

After break fast depart to Lake naivasha, is also a birdwatchers fantasy. There are over 450 species in the immediate area including the highland escarpments, which surround the lake to the south and west. From October to March, palaearctic migrants generously supplement the resident bird population. On Lake Naivasha, pelicans and cormorants are numerically superior but pride of place must go to the African Fish Eagle whose haunting call remains as significant to lake visitors as does the roar of a lion in the parks.
You will also have an opportunity to visit Hells gate National Park, is unique among Kenya’s parks, as you are allowed to walk or cycle unguided across its breadth. There’s dramatic scenery, with looming cliffs, gorges and basalt columns. Lurking lions and leopards add to the excitement! Marking the eastern entrance to Hell’s Gate Gorge is Fischer’s Tower, one of the park’s many popular rock-climbing sites. Over night at Clayfisher amp/fischerman camp/fisheagle or similar camp (L,D,B,B)

After break fast drive to the Masai Mara, one of thefinest game reserves in the world. An extension of Tanzania’s SerengetiNational Park, the Mara is famous for its vast herds and wide variety of animal species. For the next two days, you’ll explore this marvelous region on game drives (shared), although you'll also have an opportunity to go for a bushwalk along the Mara or Telek rivers to look for hippos,
crocodiles, and a variety of birds. Another option (not included) is to view the plains and wildlife from a hot air balloon! Floating over the plains, peering down at the abundant wildlife, is an unforgettable
experience.
Each year, approximately two million wildebeest, gazelle, and zebra (aswell as pursuing predators) move from the Serengeti to the Masai Mara as dry weather sets in. Migratory wildlife is concentrated in the Mara from July-October, and is found in the Serengeti from November-June. However,
the plentiful quantity of resident wildlife makes the Masai Mara special year round. Dinner and overnight at Mara sentrim camp/enchoro wildlife/olmara tented camp FB

Today you're off to the famous Serengeti National Park, home of the Great Migration.Via Isibania Border, Your drive today is spectacular as you drive up the crater highlands, stopping at the rim for a birds-eye view of the spectacular Ngorongoro Crater. Continuing on, as you crest the hillside, spread out before you, as far as the eyes can see, is the vast Serengeti. Serengeti mean "endless plains" in Kiswahili and this 6,900 sq. mile (18,000 sq. km) park is inhabited by more than 2 million large animals including more than a million wildebeest, hundreds of thousands of plains zebras, and Thomson's gazelles. Large predators including lions, cheetahs, and hyenas are drawn to the area by this abundance of prey which migrate throughout the park. Many smaller animals like rock hyrax, bat eared foxes, mongoose, honey badger, jackals, monkeys, baboons and African hares also inhabit the area along with nearly 500 species of birds.
On the way into the Serengeti you will stop at the famous Oldupai Gorge, where Dr. Louis and Mary Leakey made their discovery of the first man that walked the earth. After attending a short lecture describing the archeological digs and geology of the gorge, you'll have time to visit the small museum. After enjoying lunch, you will depart on an afternoon game drive in the Serengeti. Overnight at faru faru river lodge/sayari camp/Serengeti migration camp/ndabaka camp

Today you will wake up very early to do an early morning safari before breakfast, to spot the animals when they are more active and also to have a fantastic sun rise in front of you. The sunrise in the african Savannah is one of the most beautiful experiences one can have. After the game drive, return to the camp for brunch. In the afternoon, transfer to Ngorongoro, the 8th natural wonder of the world. With walls 2,000 ft high and a crater floor that spreads for 102 sq. miles, the crater is a virtual Noah's Ark, inhabited by almost every species of wildlife indigenous to East Africa including the rare black rhino. In fact, the crater has the greatest concentration of wild life in the planet. It contains a river, several swamps, a soda lake that, from the top, looks like steam, full of flamingoes, a forest and open plains. The large bull elephants that reside here have extremely large tusk, due to the rich mineral content of the volcanic soil and its grasses. They are the most incredible elephants you'll ever see in your life. Overnight at Simba campsite/rhino lodge or similar - a beautiful campsite on the rim of the crater with amazing views of it. It also has very modern toilet and shower facilities. (L,D,B,B)

kAfter break fast depart to Amboseli national Park via Namanga Border, Rising early for good views of Mount Kilimanjaro before clouds build up over the summit, we set off for another stimulating ‘Spice’ game drive. Amboseli is an excellent place to view a multitude of wildlife, including everything from Wildebeest to Giraffes to Baboons. Optional visit to a Masai village is planned after breakfast. Maasai warriors are famously known as the proud nomadic tribe whose legendary prowess in battle and single-handed acts of bravery in fights with the wild animals are known across the world. A visit reveals the singing and dancing that are part of their daily lives and sacred rituals. A glimpse into their homes and social structure is a poignant experience. Midday finds us at our lodge for lunch and afternoon rest, followed by another extensive 'Spice' game drive. Overnight at Kibo safari lodge/amboseli sentrim/kimana camp (L,D,B,B)

After break fast, depart to Nairobi, either to be transferred to Your home flight or to Nairobi Hotel.

Cost of the above package

Note: Availability is subject to the time of booking.